The photo below is Charles Schmidt (1860-1942) and his wife Anna Mueller (possibly Miller) (1864-1956). It was probably taken on their wedding day, judging by the flowers on his lapel. Charles Schmidt was the brother of my great-grandfather, Frank Schmidt, and the photo was given to me by Frank's daughter, Agnes, who was my grandmother. Charles and Frank were raised in Greenville, Wisconsin, which is not far from New London where, judging by the photographer's mark, the photo was taken. 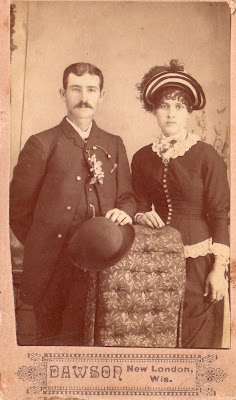 I know the above photo is Charles and Anna Schmidt because my grandmother, who knew them well, told me; perhaps more importantly, she also wrote it on the back of the photograph. I probably would not have remembered their names when I rediscovered the photo in a box some years later - after Agnes had died.

The photo below did not come to me from immediate family. This was in the album owned by a distant cousin - who did not know anything about her family history, and thus, the names that were written on some of the pictures were meaningless to her, making identifying the photos from her scans and emails very challenging.

Before trying to identify anything from the album, I took a look at the lineage of the woman who originally owned it - my grandmother's first cousin, Mary. Mary was descended from Charles A. Schmidt, the elder brother of my great-grandfather Frank Smith; both were the sons to Anton Joseph Schmidt and his wife, Theresa Kommer. An album belonging to a descendant of Charles would also likely contain images of Anna's family - the Mullers. Depending on who originally owned the album, it could potentially contain images of other, more distant relations, as well.

The photo below is the first one Mary's daughter sent me, and I realized very quickly it was not the one I was looking for - the children were all wrong. I was looking for, I believed, a family group that included my great-grandfather, Frank - but Frank had two older sisters, which immediately ruled out this photo. There were also not enough children - the blended family of Theresa and Franz Joseph Kneisel was huge. 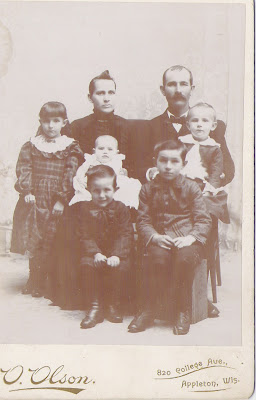 I noted also that the photo was taken at a studio in Appleton, not far from where Charles and Anna lived (in New London, according to census records). Holding up the two photos side by side, it certainly appears as though it could be the same couple, aged about ten years - which would be about right, as the wedding photo and family photo are about ten years apart.

I had the good fortune to have yet another photo in my own collection: 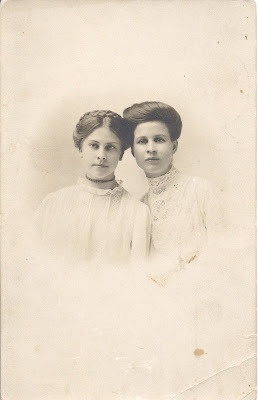 This one is also from my grandmother. The woman on the right I know to be her sister, my great-aunt Emma Smith. The photo is is marked on the back "This is Emma Smith and her cousin on her father's side." I had long suspected that the cousin in question was Emma Schmidt - and looking at the woman on the left, and comparing her to the little girl in the family picture, it seems likely it is the same girl. Their fathers were very close, and the girls - both named Emma - were born within a year of each other.

I am confident that the family group is the Charles Schmidt family, based on the source of the album, the comparison to a known photo of the the family, and the census records for the family. It was nice to get confirmation of my suspicion that the cousin in the second photo was who I thought it might be.