We've all run across them: those unmarked family photos - old ones, of sometimes beautiful people. Sometimes they are mixed up with our own, known ancestors' photos; some sit in antique shops, their eyes trying to tell us their stories, now lost, along with their names.

But sometimes there are clues, and with a bit of luck, we can give that face a name.

My aunt lives in Johannesburg, South Africa; my father (her brother) lives in the Los Angeles area; while I'm up in Seattle. I wanted family photos, which my aunt had. But she didn't know how to get them to me and none of us wanted to take our chances with 100-year-old photos and the international mail. My aunt is - how shall I say this? - not a computer person. My father arranged for someone in South Africa to scan the photos - page by page from the antique albums.


Since I knew that the photos were going to come to me digitally and were in many cases had no identifying marks on them, I requested that I receive scans of the full page from each scrapbook, in addition to the individual pictures. This would allow me to see what was grouped together and the relative sizes of the pictures. I also requested that for loose photos, no borders be cropped away; this would help me where there was a photo studio name or other detail that might identify two photos taken by the same camera.

When the pages came back, the photos we were most easily able to identify, obviously, were of people we knew. This photo, for example, is of Hanna Hakel: 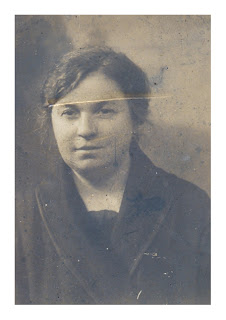 My father was able to identify her easily, as she was his grandmother, and lived with him and his family when he was growing up. Hanna (Bot) Hakel was born in 1882 in Vekshny, Lithuania. On 16 March 1901, she married Isak-Faibusch Hakel, in Libau (Liepaja), Latvia. Isak-Faibusch was born 9 December 1872 in Riga, and died 15 September 1927, in Libau. He is buried in the Liepaja Jewish Cemetery.

Here is the picture as it is in the album, on the page* 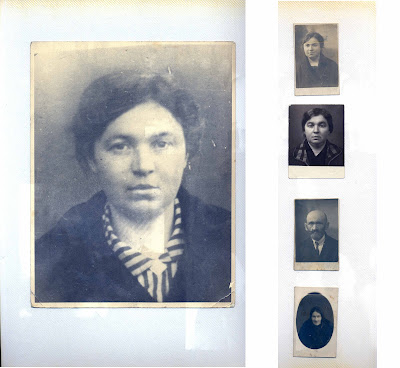 The photo of Hanna is at the top right, with another photo of her below it. Below that, though, is a photo of a man. It appears to be the same size, and mounted to a nearly identical mat.

Here is the individual scan of that photo: 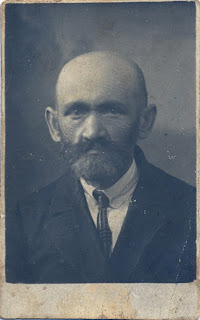 If you look behind the subject of each photo, the background has variations to it - a light-colored moon-shaped area to the right. It is identical in both photographs.

So, without having any writing on the photos such as names of people, places, or photo studio, we were still able to determine that these two photos were likely taken at the same photo studio, probably around the same time (given the similarity of the mat) - if not the same day.

It was a reasonable conclusion that the unnamed man was Hanna's husband, Isak-Faibusch Hakel.

I was able to ascertain with more certainty when I asked my aunt about the picture. Before I told her who I thought it was, I asked: "Do you have any idea who this man is?"

She replied, "I know he is one of my grandfathers, but I don't know his name. I never met either of them and don't know their names."

Once I told her his name, she remembered another detail: Isak-Faibusch Hakel, her grandfather in the photo, died of tuberculosis.

*of the magnetic-page album whose glue is eating this photo to death as I write this. Ugh - it hurts.