When You Least Expect It: Long Lost Cousins


Note: This was originally published on my companion blog, Desperado Penguin, on August 1, 2011.

It was eighteen months ago that I began my genealogical research that discovered that I have an elderly cousin in Israel. If genealogy is about anything, it's about people and history, and this man was not only a link to my family and its secrets, but also living history: a survivor of a Jewish ghetto in Latvia, then of Auschwitz, then of the cold war era Soviet Union.

I learned about him quite by accident, through a historian whose website documented the destruction of the Jewish community in Libau, Latvia - he guided me to a source for records on my family, but also mentioned that there was still a family member living, and led me to someone who provided me with an email address for my cousin, Isak Hakel.

I knew of Isak Hakel, because I had copies of some old photos that belonged to my grandmother, Rachel Hakel - who was his aunt. There was a part of me that was vaguely aware that I had this cousin, and that he might still be living. His father was Schmuel Hakel, known to me as "Uncle Samuel" from Israel, and unfortunately my only interaction with Uncle Samuel was a card he sent me as a child, which I still have, tucked away in my closet a box of treasured letters and cards. He signed his name. 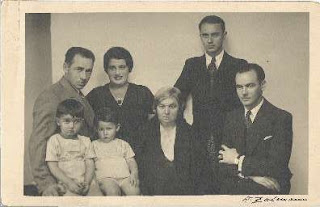 
The general outline of the family history is this: My grandparents, Harry and Rae, were originally from Libau, Latvia, but left sometime in the mid-1930's, emigrating to South Africa. World War Two came along and swept away my grandfather's family in its entirety - so complete was the destruction that he could never say their names again. Granny Rae's side of the family had better luck - if Jews in Latvia in 1941 can be said to have any luck at all - two of her three brothers survived the war. A quick look at the history of Libau tells how extraordinary this was: Of Libau's total pre-war Jewish population of 7,000, fewer than 200 survived.

Schmuel Hakel and his family - wife Ida, sons Romy and Isak, and daughter Ruth - somehow survived the roundups and mass executions in Libau long enough to be documented among the 800 or so residents of the city's Jewish Ghetto. After that point, it is hard to know precisely what happened: The family lore is that Schmuel was sent to Auschwitz and had to choose which of his two sons he could keep with him. He chose Isak, it is said, even though Romy was his favorite; but he believed Romy was smarter and had a better chance of surviving on his own.

If this sounds a little Sophie's Choice to you, it does to me too. The facts are straightforward: Schmuel and Isak survived. Schmuel's wife, Ida, and children Romy (age about 10) and Ruth (age four), perished.

I wrote to Isak and was disappointed to immediately discover that he did not speak any English - most unfortunate for doing any research, or doing much of anything really, particularly by email. He seemed to speak a dialect of Yiddish, but even my efforts to communicate with him through interpreters ran into difficulty: his replies to me were short, often badly typed, and the dialect he spoke was evidently quite an obscure one.

I emailed him my grandmother's old family photos. He thanked me for the "bilden," and sent me an assortment of seemingly random emails: A powerpoint of elaborate topiaries in Florida was one that stood out. I wasn't sure what to make of them but it pleased me nonetheless to receive them - he seemed to want to communicate as well. Every email I sent received an email in return - just not a reply to my writing in particular.

I took a chance and contacted one of the people mentioned in one email, as she seemed to have constructed some outlines of our family tree on a website, and I was thrilled when she replied, in English, and offered to interpret. She was the cousin of Isak's wife, and through her I learned that Isak, too had questions - starting with how I was related to him, and what had happened to his cousins, his Aunt Rae's children, and so on. I answered his questions and sent him more photos - of me and my family, and my cousins. I asked my own questions, and he replied with the facts about the War: Uncle Joseph, Schmuel and Rae's other brother, fled to the USSR ahead of the Nazi invasion, and so there was some family there, and Isak was in touch with them.

He did not answer my questions about Auschwitz, his mother, his sister - even the simplest questions on the subject received no response.

Receiving little of what I was looking for, I was glad of the information I received, but gradually gave up on getting anything useful - by my own standards - from Isak Hakel.

Then my father came along. Eager to connect with me, he went to great lengths for obtain copies of old family photos that still remained with his sister in Johannesburg - having numerous albums scanned, page by page and picture by picture. He brushed up on his Yiddish and wrote to Isak Hakel, a cousin whose existence he had been completely unaware of.

So there we were - an elderly man in Israel, a computer programmer in California, an amateur genealogist in Seattle, communicating with pictures and intermediaries and, on one occasion that thrilled Isak, Google Translator.  We were a family, albeit with none of the shared memories that generally helps define the relationships. Instead, we had a tremendously sad shared loss - a searing pain that can still be felt across the generations.

But Isak was the only one with any true knowledge of what actually happened in 1941 and 1942, and it did not matter what language he was asked in, he simply did not care to discuss it. Instead, he filled my inbox with links to funny Hanukkah videos on Youtube. He sent photos of him and his wife, enjoying some ice cream in the sun.

He looked happy and healthy, which I found extraordinary given the incredible tragedies that define his childhood, the unspeakable loss he experienced and I imagined him carrying with him: an unbearable great weight. I do not know what his memories were or how he bore them; what was fascinating history and a subject of great interest to me was just that: his private memories of his family and his own childhood. It was none of my business, although he did not say so. 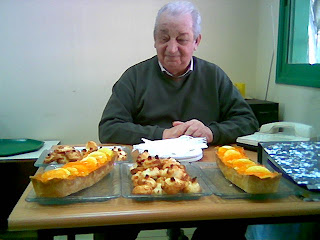 I tried to learn about my family and my history and what I learned was this: You can choose to be happy and enjoy your life, no matter where you start from or where life takes you.

The stream of email forwards from Isak Hakel stopped abruptly in May, and I got a bad feeling. I emailed and received no reply. I emailed his wife's cousin and learned he had died, age 80.

When someone dies, there will always be something we wish we had said or done - something more, whatever that something is. I don't know what else it was I wanted to do for Isak Hakel, as I was only just beginning to understand who and what he was - and then he was no more. He did not give me what I wanted; instead he gave me something far greater. And yet, I never met the man.
on July 23, 2012