One of my least favorite tasks in my genealogy is transcribing old handwritten documents. To begin with, there are the difficulties reading the old quill-written longhand, understanding much of the language (chains and rods, anyone?), and then doing battle with the often poor quality of the scans we must work from. But then you must either:


What you really want is to have a split screen, so that you have both the image and the word processing right there on the monitor screen together. I guess you could open two windows at the same time (one for word processing and one for image viewing) and re-size them on your monitor, but even that doesn't quite work right.

Anyway, you don't have to, and the best part is, it won't cost you.

Transcript is a simple software program, available as a free download, "designed to help you to transcribe the text on digital images of documents." I've been accumulating old files and avoiding transcribing them, which is not a good move as it's easy to overlook important facts when not reading carefully.

What the software doesn't do: Transcribe for you. You have to do that.

What the software does do: allow you to read and type at the same time, adjusting the quality/size/brightness of the image as needed.

I took it for a test drive on a Revolutionary War Pension I found on Fold3 recently, for the splendidly named Noahdiah Giltet, who evidently served alongside one of my own ancestors, Caleb Wright, Sr., of New Marlborough, Massachusetts. Noahdiah's pension papers mention Caleb, so I wanted to see what further information I could glean. 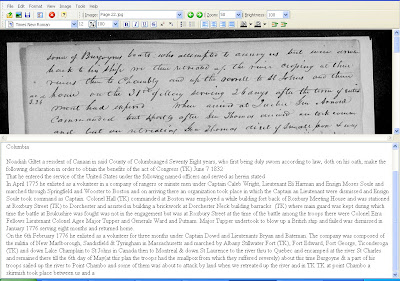 Screenshot of Transcript software with pension transcription in process.

I ran across some fun features, like even though I had my images all in separate files (labeled image21, image22, and so on), the software seemed to know what I meant when I chose "next image," which reduced fiddling on my end. And after you save and name your text file the first time, the autosave feature will help reduce the risk of accidentally losing all your work.

I still stumbled across words I could not read. I found the technique that worked for me was to type everything I recognized quickly first, and just leave a text code (TK) for the words and snippets I could not read. At the end, I used the search feature to find each TK, and then tried to identify the words, zooming in on the original document and playing with the contrast to see if I could make it out better.

It went much, much faster than any other transcription I've done, so Transcript will remain in my genealogy toolkit.

Note: Although there is no charge for personal users of Transcript, there is a charge for professional users, or to unlock special features.