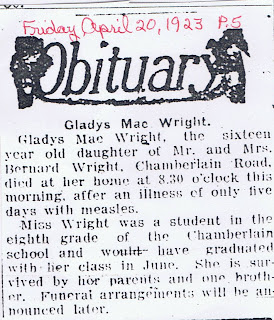 The death of a child is wrenching, even nearly a hundred years later, and even to those who never knew the children or their parents. There is a always special kind of heartbreak that goes along with a young life lost. Although the obituary of Gladys Wright, age 16, tells a sad story, there is only a hint - easily missed - of the whole story: "She is survived by her parents and one brother."

Gladys was born in 1907, the youngest child of Bernard Wright and Ella Hall of Rolling Township, Langlade County, Wisconsin. She was much younger than her other siblings, the next oldest of whom was born ten years before she was. Although her parents had eight children, at the time of Gladys' birth, she may well have been the only child living at home. 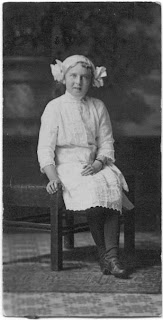 Bernard Wright was born in Wisconsin in 1857, the eldest child of Lott Woodworth Wright and his second wife, Emily Couse. On 4 July 1880, he married Ella Hall, born in 1861 in Michigan to Solon and Mary Hall. Solon Hall eventually moved to Rolling Township, Langlade County, Wisconsin, and donated the land for the cemetery that now bears his name: The Hall Pioneer Cemetery.

There is an unfortunate gap in census records, due to the lost 1890 census, so the children of Bernard and Ella are reconstructed from other sources. In 1888, birth record requirements were not as formal as they are today, and Bernard registered the births of "three boys," who seem to have been Ben (b. 1881), Walter (b. 1884), Freddy (b. 1886).

The following year, 1885, a daughter, Annie, was born; she died that same year, and the only evidence of her existence seems to be her beautiful grave marker at Hall Pioneer: 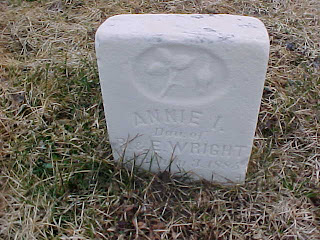 Son Bert was born 27 January 1889, followed by a second daughter, Eva May born 23 August 1893. It seems likely based on the ages of the boys, that Eva May is the baby girl in this photo:

Eva died 11 March 1895, aged about 18 months. The following year, a sister, Darthy, was born and died in less than six months, followed by brother Freddie, age about 11, the year after. All three are buried in Hall Pioneer.

Two of the brothers married: Bert married Leda Beedle in 1912, and they had five children in rapid succession. Ben married Mary Haschek in 1916. Neither marriage lasted long, however, as both brothers died within a few years: Ben contracted lockjaw after cutting a finger, and died in 1916. Bert and Leda had five children before he succumbed to influenza pnuemonia in 1919. The remaining son, Walter, married Bert's widow, Leda.

The cause of Gladys Wright's death was measles. After her death, according to family stories, her mother Ella would stare out the window at her grave every evening and weep, until one evening, Bernard held a gun to her head and threatened her life if she did not stop. Bernard's granddaughter Lillian (daughter of  Bert and Leda) contracted the flu at age 17, and believed she would die, apparently because her grandfather convinced her that she too would die young - all his daughters had.

Ella Wright died in 1926. After her death, Bernard remarried. He died in 1937, survived by his second wife, his son Walter, and 12 grandchildren.

Note: I am indebted to Linda Wright and other cousins for generously sharing their extensive research, family photographs, and recollections.
on August 07, 2012