I have submitted this post for inclusion in the Carnival of Genealogy, sponsored by The Creative Gene. All contributors' posts can be seen by August 4. The topic for this edition is Business and Commerce. 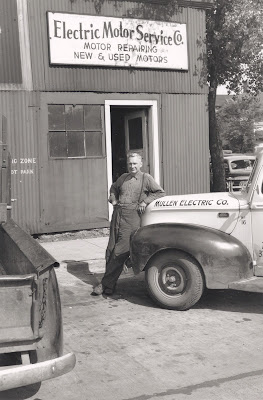 That handsome fellow in the photo is my grandfather, Howard Herrman (1901-1978), and the business behind him is the one he owned and ran: the Electric Motor Service Co., in Appleton, Wisconsin. I was only in his shop once, in the mid-1970's, when it was being cleared out and shut down. I asked my mother for her recollections:


Dad's business was located at 116 N. Superior St., between College Ave. and Lawrence St. near the entrance to Jones Park. His main business was repairing electric motors, but he also sold new and used motors and parts.

It was a rather greasy place, since all motors require oiling, greasing, etc., so Dad always warned us to be careful where we moved, and what we touched, because Mom would yell at him (and at us) if we came home with grease on our clothes. Nevertheless, we all loved the place. It was calm and quiet and the only place to have a private conversation with Dad, since at home Mother always listened in. If one of Dad's friends happened to be there, we also could hear more adult conversations about politics, local issues, business problems, etc. -- topics that were rarely discussed at home.

(My three sisters and I)  learned to type as we entered high school, and Dad "hired" us to work in the shop once a week or so, preparing invoices and typing business letters. It was good experience, preparing us for jobs in offices when we finished school and helping to prepare me for college.

We frequently dropped in at the shop when we were downtown shopping or running errands and needed a ride home. No matter how busy he was, Dad always seemed happy to see us and would chat as he worked.

Dad rented the little building his shop occupied for many years -- before he met and married our mother, until I was away at the university. Apparently the elderly owner of the property died, and the new owner wanted to raise the rent beyond what Dad wanted to pay, so he then moved to South Superior St., the store now occupied by a bicycle shop.

The photo above must have been the original shop, because I found an ad for the second location in a 1958 Appleton newspaper through NewspaperArchive.com:

That appears to be the address on the picture below, which was from my grandfather's collection. He was an avid amateur photographer and kept a darkroom in the basement at the house. 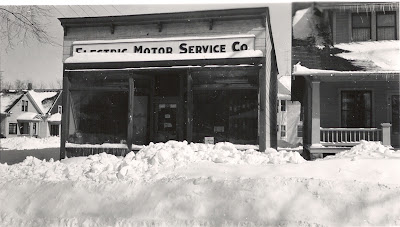 It was interesting to hear my mother describe her father's business as the place where she could have a private conversation with him, and I know the reason why: Howard's younger brother told me that Howard did not allow his wife to set foot in his shop. He considered it his domain, and "no wife of his was going to interfere" there. Apparently, that rule did not apply to his four daughters.