I first decided to try to determine a firm death date and place for Caleb, and could not: He did not leave a will (as per the Town Historian), and there is no known gravemarker or cemetery record for him or his wife. In addition, there was no indication of his death in the Salisbury church records.

The next step was to try to determine when Caleb could last be placed firmly in Salisbury, Connecticut. The town tax rolls showed that Caleb paid taxes regularly until 1773, the last year he appears on the Grand List for Salisbury.

Caleb had regular land transactions in Salisbury over the course of his life, and deeding property to his sons, including one very helpful deed to his son William, my ancestor, naming him as Caleb's son and stating William's residence at the time, Nine Partners, New York. The final land transaction I found for Caleb in Salisbury was recorded in 1775, however the deed itself was dated 26 March 1773, but not recorded until 23 August 1775. The witnesses were Caleb's sons, Cyrenius and Solomon, and the property was sold to Samuel Whitmore.

I checked with the town historian of Salisbury, who holds the volumes of Town Meeting Minutes. It turns out that the Minutes are all handwritten, and have never been indexed, so it was impossible to say when Caleb's last appearance was. She was able to send me two helpful items, though:

"Note A" next to Cyrenus' name indicates he took the Oath of Fidelity.

Finally, I searched area newspapers for mentions of Caleb Woodworth, but all I found was a reference to him on a list of Salisbury residents in a legal notice in 1771.

Finding nothing about Caleb after 1773 in Salisbury, there were two possible conclusions. The first is that he had died, sometime after 1773, but likely before 1777, when his son Cyrenius took the Oath of Fidelity, but Caleb, also a Freeman, did not.

The other possibility, of course, was that sometime after 1773,  Caleb moved to Windham.  I began my search with the 1790 Federal Census in Windham, to see if there were any Woodworths in the town at that time, and turned up a record for a "Catherine Woodward." She had two household members, both female. I was unable to locate anything further about her. 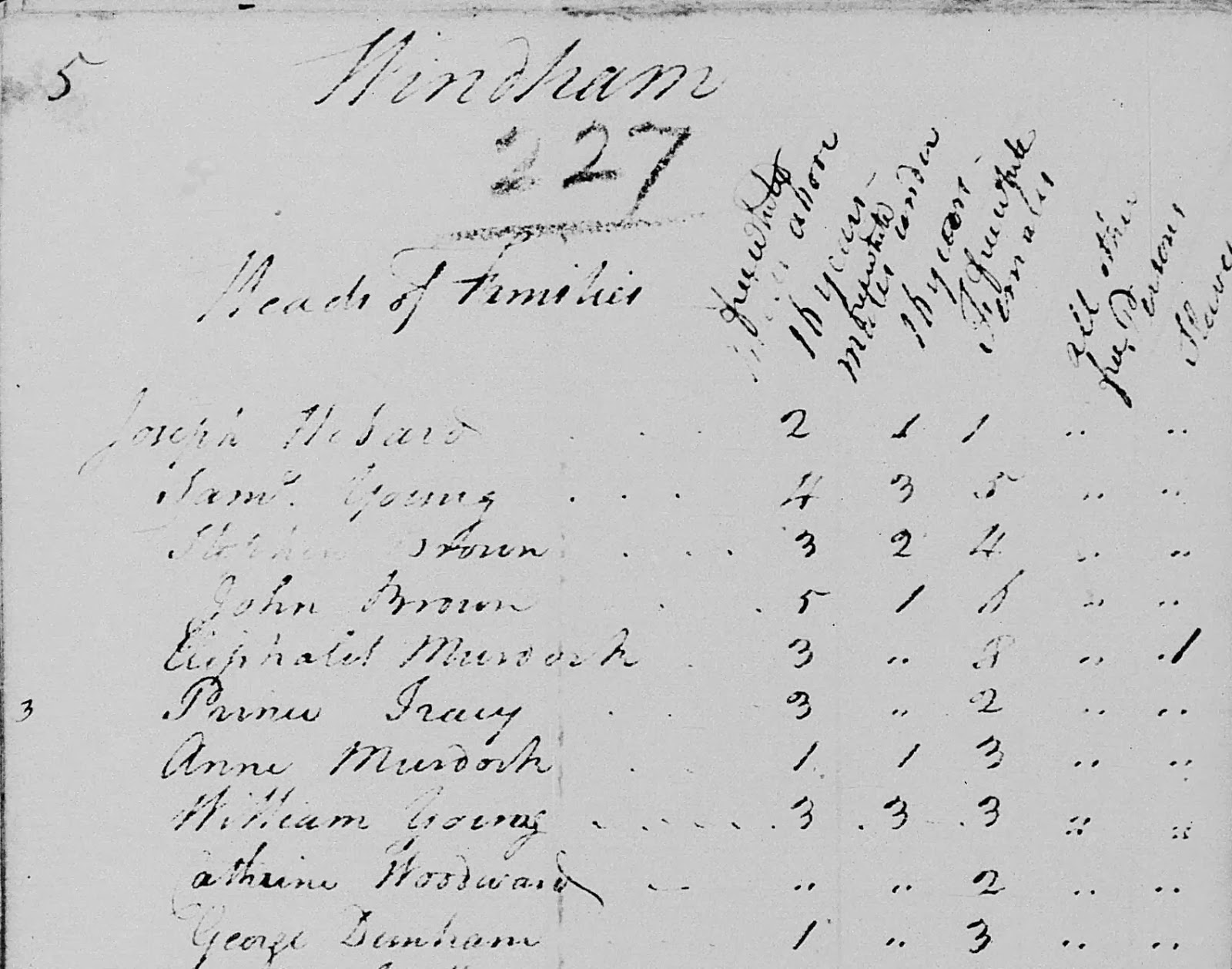 I checked with the Town Clerk of Windham, who searched the records and turned up this tantalizing tidbit: in 1776, a piece of land was purchased in Windham by a Caleb Woodworth from Elisha and Josiah Kingsley. Caleb is listed as "from Windham," and no wife is mentioned. Equally as unfortunate, no subsequent sale of the land was ever recorded. (The Town Clerk suggested that it might have been transferred later by an estate administrator and indexed under the administrator's name - in which case, good luck finding it.)

So there was a Caleb Woodworth, who served at Lexington in 1775 from the Town of Windham, and who bought property there the following year. However, neither record provides any detail that might identify him as being the Caleb of Salisbury - although I note that nothing about the dates eliminates the possibility that Caleb moved (after 1773, his final appearance in Salisbury).

The only other thought I had was this: If Caleb moved from Salisbury to Windham, at the age of 69 or more, the likeliest reason would be that he went to live with one of his children. I turned my attention next to Caleb and Jane's eleven children to see if any of them appeared in the Windham area:
Two things are clear: First, Caleb's family was unquestionably on the American side during the Revolution, and second, none of Caleb's family was near Windham. Only two of his children even remained in Connecticut, Jane and Cyrenus. I tried to track daughter Jane after her husband's death, since Killingworth is only about an hour from Windham, but it seems likely that Jane remained in the Killingworth area; her son, at least, continued to live there.


Although there are additional research possibilities, my sense is this: Caleb transferred much of his property to his sons (as shown in land records), and sold the rest, so there was no need for a will. His wife Jane is believed to have died in 1774, and Caleb falls off the tax rolls in 1773. It seems likely that around that time period, Caleb and his wife moved in with their son Cyrenus, who remained in Salisbury and is buried there at the Town Hill Cemetery.
Of course, there is always more searching that may turn up other information, or at least pinpoint his death date:
It seems likely, given his children's strong allegiance to the American cause during the Revolution, that Caleb Woodworth would have been a patriot, if he was alive at the time of the Revolution. Where would you search next?
on November 27, 2013

Email ThisBlogThis!Share to TwitterShare to FacebookShare to Pinterest
Labels: Woodworth