My Revolutionary War ancestor is a man by the name of William Woodworth (1735-1814), who served as a captain at the Battle of Saratoga in the Revolutionary War. I proved my connection to him through his splendidly-named daughter Freelove to the satisfaction of the Daughters of the American Revolution. It was no small feat, but once it was done, I looked through my notes to see what other Revolutionary heroes I could claim as my own.

William's parents were Caleb Woodworth and Jane Munger, about whom I have the following information from a Woodworth family history:


Caleb Woodworth and his wife, Jane Munger, with several children removed to Salisbury, Conn., in 1738, and was the first white man with a family to settle in the vicinity of Ore Hill, near the New York line. Jane was one of the first members of the  church, and ninth on the list in 1744, being received by letter from  Caleb was tythingman (1744). Freeman (1744), Surveyor of roads (1753), Grand Juror.

From the   Historical and Genealogical Register, Vol. 54, pp. 46-48:
"Caleb Woodworth lived  a long and eventful life. He furnished five sons to the patriotic cause in the Revolutionary War, and  although an old man at the time of the conflict, he  turned out with his musket at the Lexington Alarm and through the long struggle  after younger men had taken his place in the line, he served the country by furnishing teams and supplies to the Continental Army.  His sons, as  well as himself, were distinguished in the French and Indian Wars and his son Gershom won special mention for his valor against the Indians." 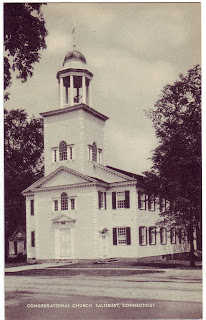 The Congregational Church of Salisbury, from a vintage postcard.
Caleb and Jane Woodworth were among the earliest members.

Although there is a Caleb Woodworth listed in the DAR patriot database, he is not my Caleb - the dates are wrong. (A bit of research revealed he was the son of Gershom Woodworth.) My Caleb, born in 1704 to Benjamin and Hannah Woodworth in Lebanon, Connecticut, was listed as a patriot with the Sons of the American Revolution - but on a very old application, and a bit of searching on the internet reveals that, more recently, the SAR has declined to accept the proof of military service submitted for Caleb.

I checked with the SAR, asking if they had the information they had accepted on that very old application.  Although they still had the original application, they informed me that there was no supporting evidence for it, so it was not likely to be much use.

My next stop was the New England Historic Genealogical Society, where I looked up the very specific Register citation mentioned above - one which is included, verbatim, in every book that mentions Caleb Woodworth.

And here is the heart of the problem: One that volume and page number of the NEHGR, the oft-cited text about Caleb Woodworth does not appear. Rather, on page 46 begins a history of the descendants of Nicholas Munger. On page 48, there is a passing mention of Jane Munger, Caleb's wife, stating the name of her husband, Caleb Woodworth, and her father, Samuel Munger.

I searched all the past editions of the NEHGR for information about Caleb in the Revolution: still nothing.

Did Caleb serve in the Revolutionary War? And if he did, did he serve at the Lexington Alarm as stated in the non-existent article that everyone quotes from?

It gets, if possible, even muddier from that point. My original notes about Caleb, received from a cousin, include two possible dates of death: 30 May 1780, but also a date in 1775. Jane, meanwhile, died in 1774. In other words, it is entirely possible Caleb was not even alive at the time of the Revolution. No source is given for either date.

I begin to retrieve every record I can find regarding Caleb Woodworth of Salisbury, Connecticut. Among the items I locate: In Record of Service of Connecticut Men in the War of the Revolution, on page 26, there is a reference to a service at the Lexington Alarm by a Caleb Woodworth  - of Windham, Connecticut. Windham is two hours from Salisbury - today, by car.

The list of questions I have about Caleb Woodworth seems to get longer and longer:

Email ThisBlogThis!Share to TwitterShare to FacebookShare to Pinterest
Labels: Woodworth