Note: This post was originally published on my companion blog, Desperado Penguin, on May 11, 2011.

If you do genealogical research, unless you are very lucky and probably royal, you eventually hit one: a brick wall - that ancestor where you stop, confounded - unable to move further up the tree.

My own brick wall is a married couple, Uriah Couse (1810-1887) and Susan Fritts (1812-1891). I connect up to them through their daughter Emily, born 1834; the family genealogy put together by my late cousin Leonard Schmidt gives Emily's place of birth as Ledyard, Cayuga Co., NY, possibly because her parents appear there on the 1840 census with their first five children, all girls. We follow the family from there to Sheboygan Co, Wisconsin, where, according to a county history, "U. Cous" arrived in the town of Scott in 1847 as one of the first residents, a year after "brothers R and E Fritts." 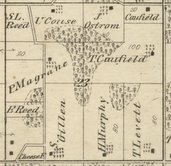 Uriah and Susan appear in Sheboygan Co. on Federal censuses from 1850-1880. Eventually Uriah sold his farm to one of his younger sons and moved to Orchard, Iowa, where their daughter Julia lived with her family. According to Iowa Cemetery records collected by the WPA, they are buried at Stillwater Cemetery.

It seems pretty straightforward, and of course, how hard could it be to find Uriah Couse? It's not likely there were too many by that name, especially at that time. Relatively quickly, I was able to locate an abstract of their 1829 marriage announcement: "Married - In Otego, on the 9th ult by David Blakely, Esq., Uriah Couse of Davenport, Delaware County, to Miss Suzan Fritts of Sempronius, Cayuga County." So far, so good - Sempronius is right near Ledyard, so Uriah must have moved up there following the marriage, although I took note of the fact the Davenport and Sempronius are not near each other at all - two hours by car, assuming you have one, which I'm guessing in 1829, Uriah did not.


Poking around on familysearch.org, I locate a baptism record for "Susannah Fritts," daughter of John and Mary Fritts, born Sept. 15, 1812 - very close to the birthdate I have for Susan (Sept 12) from Leonard's (unsourced) genealogy* and the church is located in Schoharie, NY - right across the border from Davenport. 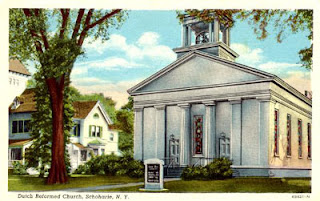 Dutch Reformed Church in Schoharie, New York, from a vintage post card. The church was founded in 1712 by Palatine Germans who settled the area.


This genealogy stuff is easy! I heart genealogy.


I don't have too much else to go on for Uriah, but I have parents' names for Susan. On the 1830 census in Sempronius, the year after Susan was married, there is indeed a John Fritts - I am thrilled. I am more thrilled when I write off to the County historian's office to inquire about retrieving records for this man, whose will doubtless will confirm he is Susan's father, name her siblings (presumably the R. and E. Fritts who also appear in Sheboygan), and then I can make my way up the line.


The Cayuga historian, however, returned with some unfortunate results: John Fritts did leave a will in Cayuga Co, in 1869, and it explicitly leaves everything to his brother, because he leaves no children. She provided information on Christian Fritts, who also lived in Cayuga and as it happens, also had a daughter named Susan - but she was born in 1818 and rather inconveniently (for me, at least) married a Mr. van Vleet. She included some other random items including a note that listed the parents of an Ira Fritts as "John Fritts and Mary Couse," with no further information or source.**


She then suggested I look at John Fritts of Otsego Co., which was close to where Uriah lived, and who, according to censuses, had a daughter the right age to have been my Susan.


Oh, and by the way - their office has no mention of Uriah Couse anywhere except on that 1840 census.


I take a look on ancestry.com for "John Fritts" on the 1830 census and discover, to my dismay, that there are quite a few of them floating around the various areas of New York State where Uriah and Susan are known to have lived. But that's okay, because there will surely be a will that will explain it all and convincingly tie my Susan to one of them.


At the family history center, I review the handwritten indexes and for Otsego Co, and find that, indeed John Fritts left a will, having died in 1860. I'm especially excited about this John Fritts as, according to the 1850 census, he does indeed have a wife named Mary. But his will names four sons and two daughters, and, rather touchingly, one granddaughter who, together with her mother, appears to have lived with Mr. Fritts until his death. None of these children is Susan, though, and there is no "R" and no "E". And there are no other wills for any other John Frittses.


I check land records in Cayuga and Otsego: Nothing. I search through the Schoharie baptism records, looking for other children of this John and Mary: Nothing. I write to Schoharie County, who tell me to write to  Montgomery County, who tell me they'll happily look at each and every will they've got for $90 apiece (um, thanks?). I lose track of how many counties I've looked in and what exactly I've looked at.


I remember a sage piece of advice that I was given about how to research genealogy effectively: Start with the present and move backward - or in a case such as this, start with the deaths and work earlier into the lives. I note that I am missing two key pieces of information: Gravemarkers and death certificates for Uriah and Susan.


I go to both Random Acts and Find A Grave and put in requests for pictures of Uriah and Susan's gravemarkers from Stillwater Cemetery, Mitchell Co, Iowa. I receive no response from Find A Grave, but a very kind volunteer from Random Acts emails me to let me know she walked the length and width of Stillwater Cemetery on my behalf and could not locate any gravemarkers. I have slightly better luck with Mitchell County, who do have death certificates on file and only want $5 apiece for copies - which they tell me up front do not contain any parents' names.


I move earlier in their lives: I contact the library which houses the newspaper from which their marriage announcement was culled for that book of abstracts, and receive in the mail a copy of the newspaper page, which contains no more information than the abstract did, but is still nice to have. Another $40 gets me a search of all the library's remaining resources, which turns up nothing. DAR library: same result.


I stop tracking what resources I've checked, and try to block out what this is all costing me. I stop writing letters. I begin to accept that some questions to not have answers, and some lines simply cannot be tracked. I start telling people that some of my ancestors sprung from the head of Zeus, fully armed.


In short, after 18 months of beating my head against a brick wall, I give up.


*Not to put too fine a point on it, but please - cite your sources. Someone, someday will thank you profusely for it.
**I really just can't stress the whole "cite your sources" thing enough.
on July 22, 2012