Note: This post was originally published in my companion blog, Desperado Penguin, on May 24, 2010.

After discovering where my great-grandfather Wenzel Herman was definitely not buried, I made it my business to find out first, why he inspired so much animosity among those who knew him, and second, when and where he died and was buried.

Since I had exhausted cemeteries to look in, Wisconsin death records and indexed obituaries, and the post-1930 censuses are not yet available, I decided to poke around my local library for some clues. It's hard for me to leave my house to spend extended periods at the library, but the King County Library System has very kindly put several genealogy databases online for my at-home, oddball-hour researching pleasure.

I thought for sure there must be an obituary somewhere for Wenzel, so I started with the Newspaper Archive Database, and simply entered Wenzel Herman into the search box.

Several hits immediately came up, all from the Oshkosh NorthWestern newspaper. From the newspaper I was able to construct the following series of events, all in 1939:

March 22: Death of Emily Frank, daughter of Wenzel's second wife, Clara Herman, by her first marriage. As far as I can work out from the obituary and census records, this was Clara's only child.
April 11: Wenzel Herman pleads guilty to one count of contributing to the delinquency of a minor girl and is sentenced to six months in prison.
July 5: Clara Herman dies "after a long illness."
July 6: Wenzel Herman is granted early release from County Jail to attend his wife Clara's funeral, apparently having been well-behaved whilst in prison. 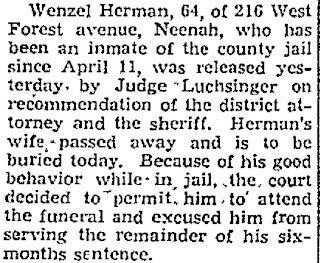 From the Oshkosh Northwestern, 1939.

If there is a Blacker Sheep than Wenzel on my family tree, I don't want to know. Still, I was curious if court records might reveal anything further, possibly earlier brushes with the law or something that might give me a bit more insight into why my great-grandmother Hulda divorced him years before Clara had the misfortune of marrying him.

Also, I don't have a single photo of the man, and I'm kind of curious to know what he looks like. Might there be a mug shot, I wondered?

I contacted someone on Random Acts of Genealogical Kindness and inquired if she could check the courthouse for me. I was very upfront about what records I was looking for and what Wenzel was arrested for, figuring it might make someone uncomfortable and they should have the right to decline - it's a favor for a stranger after all.

The woman who replied was happy to assist and even eager to learn something new. Unfortunately, when she checked with the courthouse, she was told that the trial records prior to 1959 had been destroyed by the county as they were "of limited genealogical value."

Yes, well, maybe in other families, but for mine? It's kind of a bummer, Winnebago County.

She did offer a very helpful suggestion, though - she directed me to the Green Bay Area Research Center, which houses, among other things, divorce decrees from about the time Hulda would have divorced Wenzel. For $5.00 and a self-addressed, stamped envelope, I got my answer: Hulda was granted a divorce on the grounds of non-support and since she "did not know Wenzel's whereabouts."

The date of the divorce was just a few days before she remarried in a Catholic church, listing Wenzel as "deceased."* So, after all that, where did Wenzel go? His wife was gone and his son wanted nothing to do with him. But I could not turn up a Wisconsin death record or an obituary anywhere for him.

I reflected back on what my grandmother had originally told me, that Wenzel had gone to Illinois because his wife had family there. I had discarded that as incorrect, since Clara's family was clearly in the Neenah, Wisconsin area, where she was. But, since I was out of other ideas, I ran a quick Google search for an Illinois death record database, and found what I was looking for almost immediately: An index entry for Wenzel Herman, 1946.


I mailed in the paperwork and $8 check, and two weeks later, I had a death certificate for Wenzel Herman, including his correct parents' names and birthdate (the year was off but the month and day were correct).

The person who provided the information was his third wife, Bessie. It listed a cemetery in Chicago, so I once again got on the phone, but this woman was not as helpful as the woman at Oak Hill, simply confirmed that Wenzel was indeed buried there but providing no further information.

I went to FindAGrave and created an entry for Wenzel, then posted a request for a picture of his headstone. It took only a day or two for a very nice gentleman to get to the cemetery, locate the grave and discover that Wenzel was buried there, but even though his third wife outlived him by 13 years, in all that time, no one put a marker on his grave - and she was buried not with Wenzel but with her first husband.

The man that helped me with this turned out to be a Chicago police officer*, and he also took a picture of the grave of Bessie Herman. I set up a findagrave entry for her as well and he added the picture of her grave marker (unlike Wenzel, Bessie has a very nice one).

I feel kind of strange and awful being the person who "owns" her online memorial, given the facts of how we are connected. I want to somehow apologize to her, and to Clara's family, all of them,from Wenzel's family, all of us. I want to tell them that Wenzel's only son was a truly decent man, and his children and grandchildren are also truly decent people - quirky, yes, but decent.

I also feel sort of guilty: now I know why my grandfather wouldn't talk about his father, and why he turned Wenzel away when he came to the house. I'm sure my grandfather didn't want me dredging all this up, after he hid it away from us all so well, and for so long. But on the other hand, having the knowledge gave me a much deeper understanding of my grandfather, and a much greater pride in him (as though that were possible) for having been such a warm and loving man after having experienced such loss and shame.