Many years ago, on my annual Wisconsin Christmas visit, my grandmother took me to visit a cousin in Appleton - a woman whose exact relationship to us was always a little fuzzy to me. This cousin, Mary, had a large photo album filled with ancient photos, and we paged through the album slowly and carefully. Some of the photos I recognized - my great-grandparents, Frank and Anna. One of the photos was of my great-great-grandmother, Theresa Kommer.

It was quite astonishing to see a picture of a woman with such a compelling history. It is easy to conjure up visions of the hardship of her life: Theresa grieving for her murdered husband, far from her homeland and family, being forced to remarry out of necessity, and living out the rest of her life in great sadness. I don't recall thinking she looked sad though. I do remember wishing I could stare her picture for hours.

I wanted to make a copy of the photo, but Mary refused. This was in the days before scanners, and I imagine she did not trust a 16-year-old girl to safely return her family treasures. I promptly forgot about the whole thing until a couple of years ago.

Mary had since died but I was able to locate her obituary and with the help of google, a couple of her children, who I wrote to and who directed me to the current owner of the album. She, in turn, was happy to send me scans of all the pictures. I was looking for one in particular, and described it as I remembered it; unfortunately, with the passage of many years, the description I provided of what I remembered - a photo of a family group - only matched one photo, which she sent and which I quickly identified as someone else entirely.

The owner had no idea who any of the people were, she said, and I was a bit surprised that when I identified the first picture she sent as being her own grandfather, she didn't seem to care. She took the album completely apart and send me scans of individual pictures. She said there were no marks on the pictures.


It was a frustrating experience for both of us. It turned out that there were names on some of the pictures - but she would only tell me this when I made an inquiry about a certain photo, "Can you tell where it was taken from the back?" and she'd say, that's not who you're looking for, that photo is marked (some other name). In another email, she gave me a list of names that were on the photos, but did not tell me on which photos - and attempts to elicit that information seemed to frustrate her.

When I initially contacted her, she was excited to help me find a photo I very much wanted. In the end, she no longer responds to my emails.

My cousin Scott looked through the scans she sent and thought that this one in particular was promising: 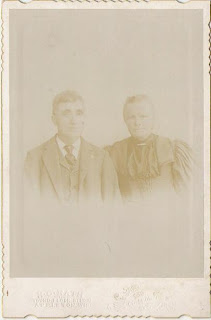 He noted the name and location of the photo studio, which was in operation in the same area the Franz Joseph Kneisel and Theresa Kommer Kneisel lived at about the time they would have been the age of the couple in the photo.

I could not persuade the photo's owner to send me a more detailed scan.

A fellow resercher at my local family history center had a similar story that he told me to reassure me, "You're not alone." I called my aunt for advice, and she told me, "If people are interested in family history, you'll get everything from them, but if they aren't, you'll get nothing. They get too frustrated."

I got more than nothing, but I keep wondering if I could have added a lot more photos to my collection if I had perhaps been a bit less focused on just trying to find one particular thing. There was a lot in the album of interest, and had I gone more slowly and simply tried to gather information, the result might have been different. For example, at one point the owner indicated that there was a photo of Anna Kneisel - the only surviving child of Theresa's second marriage - in the album: I would have loved to have it. I do not know which one it might be.

My cousin Scott consoled me: "You found those pictures. There are more out there. We'll find another one - eventually."
on September 01, 2012