I wrote previously about my frustrations in trying to identify a photo from an old album of unmarked family photographs. I was so disheartened by the experience that I stopped researching that part of the family for nearly two years.

Only on my recent discovery of an error I had made on Theresa Kommer's death date did I decide to revisit that part of the family. I ran across a very old post on the Fox Valley Genealogical Society website that provided me with the clue I needed to finally begin tracing Theresa's line back to Europe. I contacted the woman who had made the post, who was descended from Theresa's daughter Elizabeth - my great-grandfather Frank's older sister. The original poster offered to send me a copy of her research folder, and I requested "any photos she might have of that part of the family." I received a thick sheaf of documents, and an assortment of family photos, including this one: 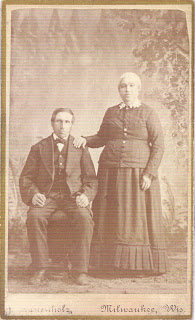 She also included photographs of Anna Kneisel, the daughter of the couple above, and Elizabeth Schmidt, from Theresa's first marriage. 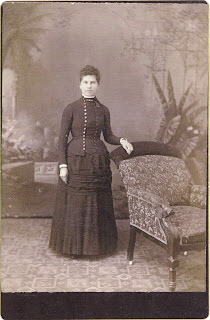 Interestingly, when I went back to the photos I had received from the unmarked album, one was a duplicate: A wedding photo of Anna Kneisel was in both sets.

I'm still not sure. It is especially difficult to compare the two as neither of the pictures is an especially good quality scan. There is nothing super-obvious to link the two pairs, no matching jewelry, clothing, photo studio, etc.

I asked my cousin Linda her opinion, and she compared both photos and said she wasn't sure, either. She did, however, make another side-by-side comparison: 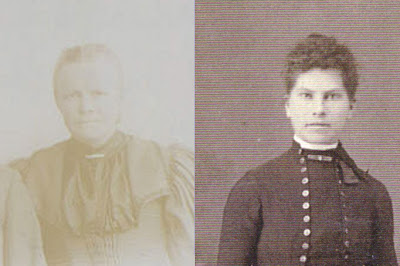 The problem with the idea of the photo on the left being Elizabeth Schmidt and one of her husbands is this: She wasn't very lucky in her marriages. Her first husband (Bernard Melzer) died not long after they married; and she divorced her second husband (Anton Bauer) after a brief marriage - the 1905 census shows them living in separate households. She did not marry a third time, so it is unlikely there is a photo of her in her old age with a husband.

It seems very likely to me that The Unidentified Couple of "Scan #5" really is Franz Joseph Kneisel and Theresa Kommer. What do you think?